PERFORMANCE ART
Video of part one of "siku/siku" (of a two part piece) performed at the Arctic Arts Summit in Harstad, Norway, 2017.

"siku/siku" is a performance art piece that debuted in Harstad, Norway at the first Arctic Arts Summit in 2017.   "siku/siku" has two parts to it, each part was performed on two separate days.   The show was conceived and executed by Allison Akootchook Warden.  Siku is one word for ice in Iñupiaq, and it is also a word that is used as an alternative name for the drug meth, or methamphetamine.  Meth use is in the Arctic communities of Alaska, and Warden has seen it effect her Iñupiaq Nation directly.    On day one of the performance, Warden sits on a white box, in a square shape.  In the half hour performance, she portrays a character that has taken the meth substance.  On day two, Warden returns on her box, but this time is dressed in traditional clothing and only speaks in Iñupiaq.  She is portraying a character that is working towards the revitalization of her Iñupiaq language.  This half hour day two performance has a very different feel from the performance the day before.

The performance serves to illustrate the impact of the rapid colonization of her traditional homelands and how one life can be very different, just through a few different choices, circumstances and reactions an individual has towards life's challenges, especially systemic barriers, including racism.   The character portrayed on both days is in essence, the same person. 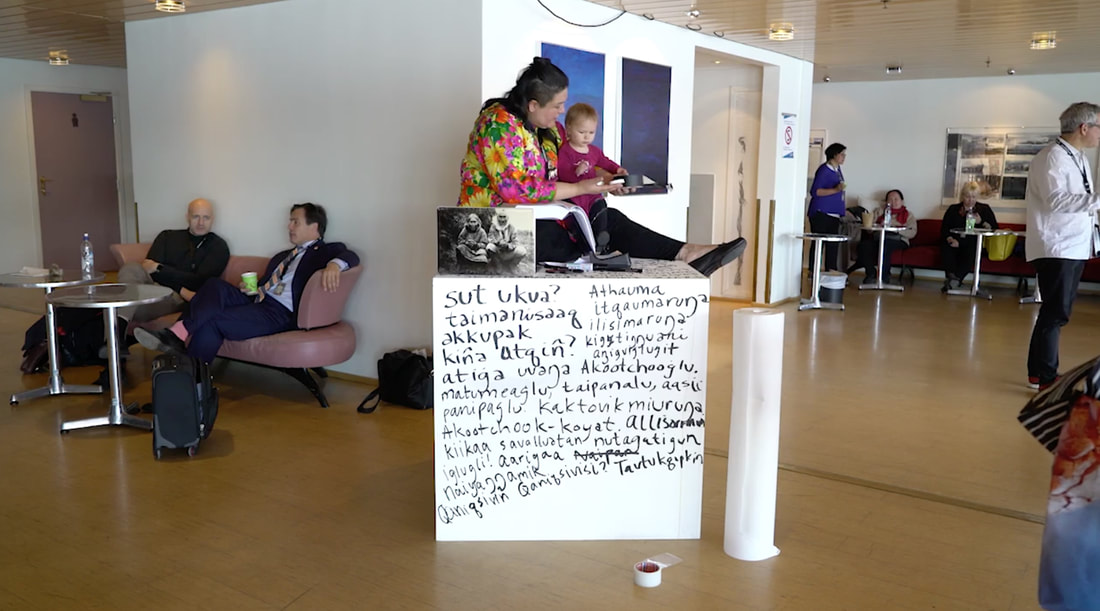 Still of part two of "siku/siku" (of a two part piece) performed at the Arctic Arts Summit in Harstad, Norway in 2017.

One four foot x four foot white box needs to be constructed for the show, one side (the side facing the floor) can be hollow.
Each part of the two part performance is 30 minutes in length.  The artist needs about 15 minutes to transition from piece to piece.
The preference is that both parts of the performance are filmed and then later installed near the cube that is left as an artifact of the performance.  The cube is written on in part two of the performance.
The second part of the two part performance invites the audience to participate in many different ways.
The piece can be done over the course of two days, or on one day with a 15 minute break in between parts.  The separate days do not need to be consecutive.
The artist needs a green room to change in between parts of the performance, if the two parts are on the same day.  The green room can look like an office, a conference room, a bathroom, a closet, a storage room, etc.  Many different room types can work, as long as the artist is changing out of the view of the audience.
The artist utilizes two language books and a large black marker.
Part one of the performance may not be suitable for audiences under the age of 13.  Parental discretion is advised.  Children may be present, it is up to the parent.  There is no nudity, there just is some strong language.
The audience does not need to be fixed in location, they can move around during the performance, they can weave in and out of the performer's reach, there does not need to be any chairs set up for audience members to sit on.
There are no lighting or sound requirements and the performance can happen in a wide variety of spaces.
Baby not included, the image above was a pure happenstance - a baby of a friend of the artist decided to join in the performance spontaneously. 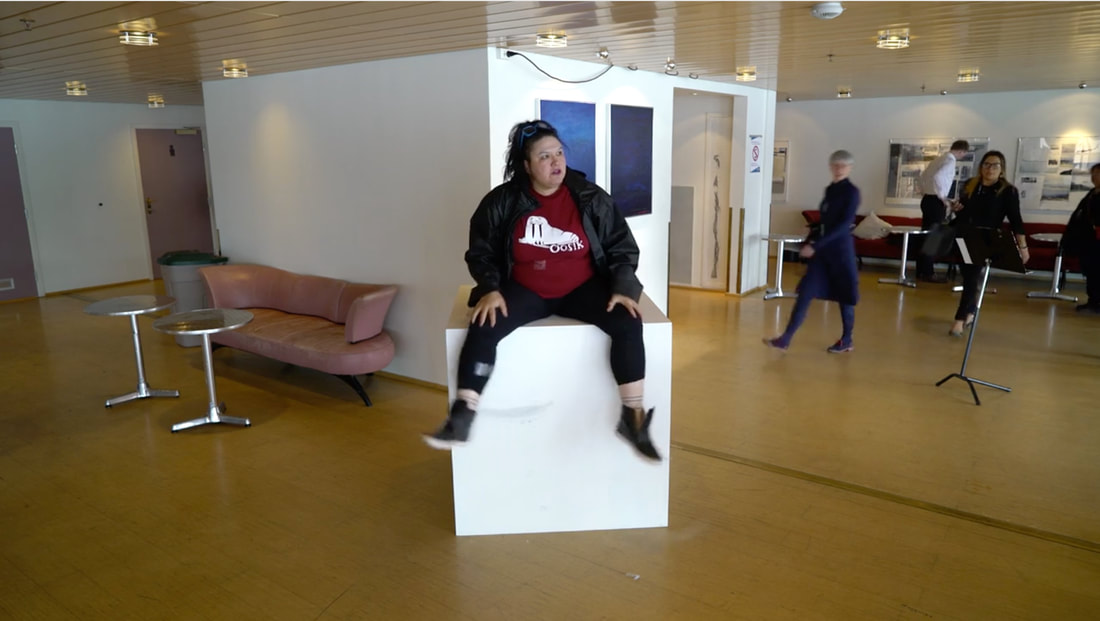