a man's process towards love
"Let Glow" is a social practice performative installation that was held at the Bunnell Street Arts Center in Homer, Alaska in 2014.  Warden engaged in a month-long Artistic Residency in performance art at the Bunnell Street Art Center and utilized her time to work out new concepts and ideas that she had around community engagement and social practice methods through installation and performance.

​"Let Glow" is a show that focused on how a man finds his way towards love, how a man knows love and has a relationship to love.  Men from the audience were asked to be integrated as part of the performance in real-time, sharing for the rest of the audience about their journey towards love and partnership.  Warden's biological Grandmother (Aana) was known for her matchmaking abilities and Warden created interactive workshops throughout her residency with the intention of matchmaking community members.  The residency engaged the community of Homer deeply, with many different workshops designed to strengthen the community as a whole and hopefully make real love connections.  One couple was formed from the residency and they ended up living together and being a couple for about six years, partially due to Warden's clever encouragement during her time in Homer.

Warden treated the Bunnell Street Art Center as she would the Kaktovik Community Hall of Kaktovik, Alaska as she taught traditional games (both winter and summer games) to the primarily non-Indigenous community members of Homer.   The workshop attendees also made their own sets of antlers to wear during the installation/performance, where many members of the community were integrated in the performance throughout the evening, either as dancers, demonstrating games or of men telling stories about their hearts and love.

Warden wanted to focus on a man's process towards loving for many reasons.  One is that Alaska has a high rate of suicide amongst men, and she was interested in creating safe spaces for men to talk about issues around their hearts as well as bonding with other men in their community through competitive and fun games.  Women also competed against one another in games, and there were also interactive co-ed games as well.

"Let Glow" as an installation gave every audience member an opportunity to put on caribou antlers and be a collective herd of caribou, with a deep investment in the flow of the social practice performative installation at Bunnell Street Art Center over the course of two separate performance nights.
The show did not tour, as Warden ultimately felt that she needed an artistic partner to bring the show to it's full fruition.  To Warden, the show was a huge success, as she was able to work directly with community as part of her month-long residency and experiment with social practice techniques that she had always wanted to attempt.  It was a bonus that one couple was formed as part of the residency, and possibly more couples emerged of which Warden is unaware.

Many thanks to the Bunnell Street Art Center for their support and their amazing Artistic Residency program!
Bunnell Street Arts Center Homepage
above:  Two community members from Homer, Alaska compete in leg wrestling, one of many community games that were shared by Warden. 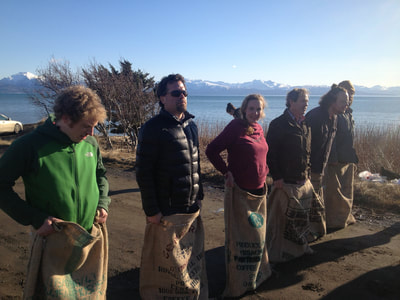 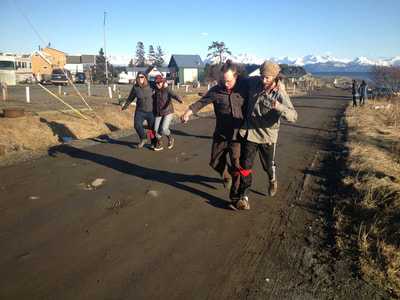 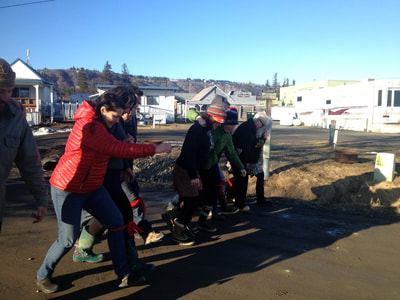 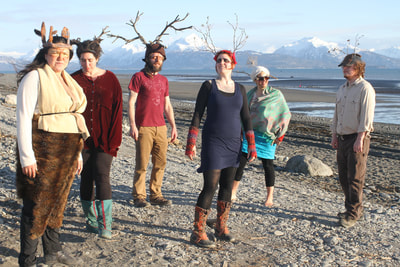